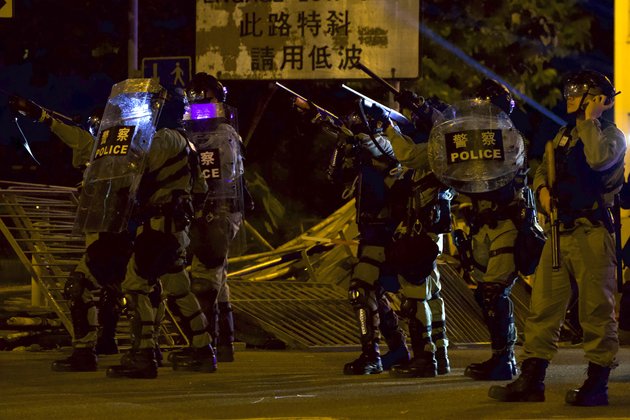 Stepping up the suppression, however, may backfire, fueling tensions in the city and further hurting its economy if protesters refuse to back down, they add.

Xi told a summit in Brazil Thursday that "persistent radical and violent crimes have seriously trampled on the basic principle of 'one country, two systems' scheme" in Hong Kong, the state news agency People's Daily reported.

"Stopping the violence and restoring order is Hong Kong's most urgent task at present," he said.

Xi also expressed support for the city's chief executive, Carrie Lam, the Hong Kong police, and its judiciary in punishing what he called "violent criminals."

"The Chinese government is unwavering in safeguarding its sovereignty, security and developmental interests, implementing the 'one country, two systems' scheme and deterring any interference by foreign forces in Hong Kong affairs," he added.

While a reiteration of Beijing's long-held stance, Xi's remarks are effectively a direct order for Lam to get tough and end the city's five months of political unrest, said Sang Pu, a critic and Hong Kong commentator.

"This [stance] was reiterated by Xi Jinping in his statement in Brazil and this Brazil statement makes sure that suppression overrides and prevails everything else. And this suppression will not go away very easily," Sang said.

On Friday, protesters continued to paralyze parts of Hong Kong for a fifth day, forcing schools to close and blocking some main roads, as university students barricaded campuses and authorities struggled to calm the violence.

Lam also condemned an "attack" in London on Hong Kong Secretary for Justice Teresa Cheng during a confrontation with protesters, during which Cheng suffered "serious bodily harm," according to Hong Kong government statement. Lam said the incident was barbaric and violated the principles of a civilized society, the Hong Kong government said.

Sang said he believes Lam is considering emergency measures such as curfews or cutting off the Internet, as Xi's statement followed a short-lived tweet by China's tightly censored Global Times, saying that the city government was expected to announce a curfew this weekend.

The tweet was quickly deleted as by editor-in-chief Hu Xijin because there wasn't sufficient information to back it up.

Media speculation was rife in Hong Kong that a meeting of ministers chaired by Lam late Wednesday was devoted to discussing emergency measures including the curfew. That led the city government to issue a press statement Thursday to clarify what it calls "rumors ... totally unfounded."

Sang said he believes the deleted tweet was meant to test the level of tolerance or fear for curfews among Hong Kongers while Lam gauges pressure from the outside world in deciding her next move.

Were Lam to step up the suppression against protesters, the city's political crisis would worsen, as protesters would not back down, Sang said.

"Even if they're tired, even this battle will not be the winning battle, they will still stride on because actually they have no other choices," he said.

The reason is, he said "that if they now step back and then forgo any resistance anymore, the real suppression will come."

"Many people including me myself and many other Hong Kongers will be arrested at home and even disappear suddenly," he said.

Hong Kong "has already slipped into a recession in the third quarter and I expect to see another negative growth in the fourth quarter," he said.

The recession will continue if the unrest fails to cool, he said, "However, if things cool down, we may begin to see a mild rebound."

The economist warned that the city's economy would take another hit if legislation under consideration in the U.S. Congress to impose sanctions on those responsible for human rights violations in Hong Kong were to become law, but that would not force China to change how it rules Hong Kong, said Shi Yinhong, an international relations professor at Beijing's Renmin University.

The act, he said, "will definitely have a serious adverse impact on the China-U.S. relations, the Chinese economy and Hong Kong's financial stability."

"No matter how large an impact there is, the People's Republic of China government's determination to safeguard its sovereignty over Hong Kong and the city's stability won't waver," he said.

Shi added that Beijing will firmly support the Hong Kong government's decisions to solve its political crisis even if Lam decides to invoke her emergency powers.