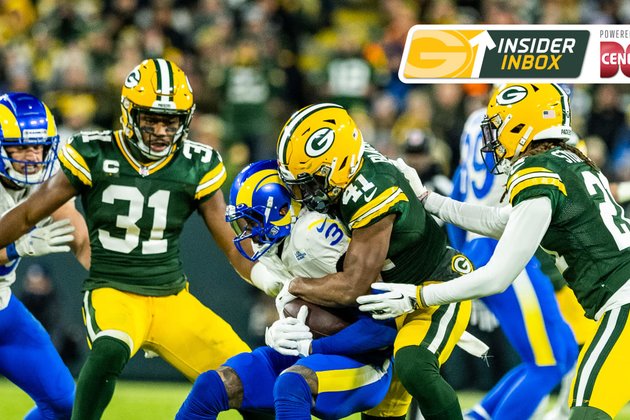 Inbox: It's the same recipe with slightly different ingredients

Thank goodness for the bye week, we all need to rest. I think, barring injuries/players available, the Packers can run the table. Do you think the Pack will run the table or does it matter, the goal being the Lombardi?

Yeah, I'm more interested in running to Sofi than running the table. The Packers had to do that in 2016 to keep their playoff hopes alive. This year, Green Bay is out in front of the pack (no pun intended). The Packers' focus needs to be on getting healthy and making sure they're the best versions of themselves come playoffs.

The Packers finally reached their bye week after playing 12 consecutive weeks. When there were only 12 games to the regular season, I don't recall there being a bye week. So, what is the big deal about the Packers break being so late? Yes, it was a long stretch before having a break; but there was a time when every team had this situation.

Well, the game also was a lot different back then, Rog. Here's really what's crazy - the Packers don't even have the latest bye. New England, Miami, Indy and Philly have Week 14 byes. I didn't realize that until Aaron Rodgers' appearance on "The Pat McAfee" Tuesday. The NFL wants 17 regular-season games? Fine. You got it but let's wrap these things between Week 6 and Thanksgiving. Weeks 13-14 are too late, especially for teams out of contention.

Having a 9-3 record with all the injuries is amazing. As a fan, I've always appreciated the Packers' history of MVP QB-ing. But more and more, I'm appreciating how fortunate we are with the GM runs of Wolf-Ted-Gutey. Not just drafting well and finding those stopgap hidden gems midseason, but also the hard decisions on when to be patient with development (Davante Adams, Rashan Gary), when to let good players walk (Clay Matthews, Jamaal Williams). Tough job. Good times never seemed so good.

As much as we talk about the quarterbacks, the run the Packers have been on with their front office cannot be overlooked. Because more than any other position, coaching job or area in the franchise, there is a direct connection between Brian Gutekunst's front office and the one Ron Wolf assembled in the early 1990s. Even today, the front office's core principles are rooted in Wolf's teachings.

What changes have you seen in Matt LaFleur over the time he has been head coach? How has success impacted him?

I haven't seen success affect LaFleur at all. If anything, I think you've seen him become even more grounded than when he got here 35 months ago - and that's saying something. The one area I've definitely seen LaFleur grow more comfortable is as the "figurehead" of the football team and it's been great to see more and more of his personality shine through this year. He had a Midas touch for knowing how to handle, condition and prepare a football team from Day 1. It's neat to watch LaFleur settle into all the other aspects of the job.

This year's defensive success with an injury-thinned roster got me thinking back to the last Super Bowl team when then DC Dom Capers had to surmount a similar challenge. What innovations did Capers bring to the game that changed the way defenses play and still reverberate today?

It's the same recipe with slightly different ingredients. Capers had the 1,000-pound line of Ryan Pickett, B.J. Raji and Howard Green stuffing the run. Barry uses that "Penny" package with a five-man front and two-high safeties. Capers innovated with the "Psycho" package, a precursor to "NASCAR," because that's where the strength of his team was. In his own way, I think Joe Barry has done the same thing. The job of a defensive coordinator is to build a flexible scheme and make the available pieces fit. Barry and his staff have been exceptional at that this season.

Should Rodgers get his toe fixed now so it doesn't get worse later in the season or possibly affect him in the playoffs?

Based on what Rodgers told McAfee, it sounds like the toe should heal without surgery. There is an option on the table where Rodgers could have a procedure done on a Monday or Tuesday that likely wouldn't force him to miss a game, but it would immobilize the toe. Rodgers is willing to deal with the discomfort to make sure he's on the field Sunday.

Greetings. Just wondering. If a football is thrown, passed, kicked, spiked into the stands, do the fans get to keep it? This applies to all fans except Cub fans, who would probably throw it back.

I think so. It sounds like Rodgers' wayward spike after his touchdown run on Sunday resulted in some lucky fan going home with a souvenir.

Good day Insiders. For Wes, you were great on the Matt Ramage show. For either of you, we have found some real gems to fill the roster while our IR heals up, Rasul Douglas for instance. When our guys Jaire Alexander and Za'Darius Smith come back, would Gute make room from the same group, for instance Ja and a DB versus say WR, Z and a LB versus say a safety, what do you think?

Thanks for checking it out. I don't think the idea of "making room" really applies here because the Packers haven't really had that luxury due to how banged up they've been. There have been so many linebackers, receivers and linemen who have been activated from the practice squad to make ends meet. So, no, I don't expect a big roster shakeup when those guys get back. Injuries have taken care of that already.

Time to read the tea leaves. Did you see Za'Darius Smith posted on IG a photo of himself in uniform captioned, "It's About That Time"?

I did...and hopefully it is about that time. Because the Packers need him.

Loud road venues can be particularly challenging for the visiting offensive line. Do you think it would be advantageous to David Bakhtiari to return to the field when the Packers have a home game?

It's not a prerequisite but it certainly would help.

Come on man. The best Viking QB in the Favre/Rogers era has to be Favre.

Warren Moon, Randall Cunningham and Brett Favre all had one big season for the Vikings, but if we're looking at longevity, I think Daunte Culpepper deserves a lot more credit than he receives. Maybe I favor Culpepper because he was a home-grown talent but he also played in four playoff games for Minnesota. His run was up-and-down at times but the highs were pretty darn high in 2000 and 2004.

I just wanted to share a dream I had last night. I dreamed LeRoy Butler made it to the Hall of Fame, then he was being honored on the field at Lambeau and as the fans gave him raucous standing ovation LeRoy took off running and did a Lambeau Leap in the end zone. I hope this is more of a premonition of something special to come.

Wes and Spoff, Happy Friday. When the radio in Aaron Rodgers' helmet is active, can the coach hear Aaron or is it only a one-way transmission?

One way - Matt LaFleur to Rodgers.

How much time off does the coaching staff take during the bye week? Do they work all week or take a couple days to recharge?

The coaches were in on Monday and Tuesday, and off for the rest of the week.

The Packers have swept the NFC West. The last time the Packers swept a division not their own was in 2011 against the NFC South. And they still have a chance to sweep the AFC North. It wouldn't count more in the standings but sweeping two divisions would be one more way to remember this quirky year.

And they didn't just sweep the NFC West. They swept the division many considered to be the best in football. It's been a quirky year but it's given us all a lot of fond memories.

Good morning, Wes. Is there a bigger waste of time than the NFL Network's weekly power rankings?

The hundred other power rankings?

To whom should the kudos for the Brian Baumgartner video be directed? Is there any other NFL team with as talented "support" people in place that could come close to the Packers organization? Mark Murphy performed fantastic in his role also. Another example of why the Green Bay Packers website (including Mike and Wes) is far and away the leader in the NFL.

That was a collective effort among Duke Bobber, Ryan Hartwig, Mike Vandersnick, Kregg Shilbauer and Adam Hoebelheinrich. They did an amazing job with it. Please check it out if you haven't seen it already.

When Aaron Rodgers scored last week, my 9-year-old nephew did "The Belt." Not to be outdone, his 12-year-old brother pulled off one sock, held up his bare foot and hopped around. Any way you can forward this idea off to Rodgers?

I may conveniently forget.

Did you see we traded for Hunter Renfroe?! What do you think of that trade?

Mike and Wes, well, how does it feel to have your bye week vacation come to an end? Just kidding! The news doesn't stop just because the team gets a week off. I would hope most fans realize the lights weren't turned off at 1265 Lombardi Ave. this past week and life went on albeit at maybe a bit slower pace. No question or observation for you this week, just best wishes for a safe and happy holiday season to you both, your families, friends and our II family. GPG!

It might be the bye week but don't tell that to the Inbox or gameday program. Those two don't take naps. But I am excited to have a full weekend with the family before this final sprint to the finish line.

Time to rest and watch,

I love how both you and Dean got your poems in super-early on Friday. You obviously had weekend plans.

Dean from Leavenworth, IN

A time to focus on oneself

A time to rest

A time to recover

A time of healing

And that's precisely what I intend to do. Have a great weekend, everyone.