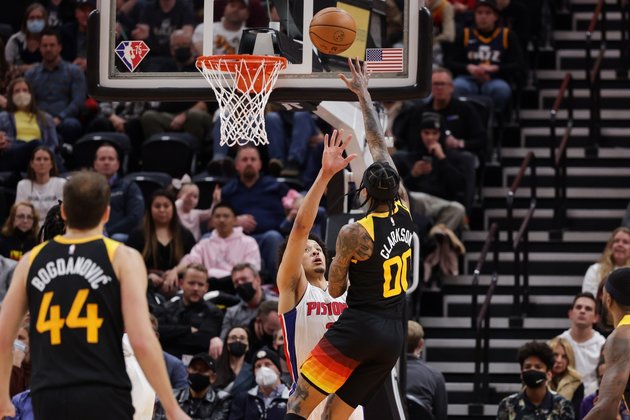 Rudy Gobert scored a season-high 24 points and grabbed 13 rebounds while Bojan Bogdanovic logged 23 points as the Utah Jazz earned a 111-101 win over the Detroit Pistons on Friday night in Salt Lake City.

Gobert was questionable to play earlier in the day because of ankle soreness, but the three-time Defensive Player of the Year suited up and made 8 of 11 field-goal attempts while blocking four shots to help the Jazz pick up a much-needed win.

Utah, which again played without Donovan Mitchell (concussion protocol), had lost two straight games, six of seven overall and three consecutive at home. That rough stretch included a 126-116 defeat at Detroit on Jan. 10, when the Jazz blew a 22-point lead.

Former Jazz forward Trey Lyles scored 16 off the bench. Rodney McGruder had 15 and Saddiq Bey 13 as the Pistons dropped to 1-2 on their four-game Western Conference road trip.

The Jazz led 27-26 after one quarter and were sparked by Gobert in the second quarter to take a 60-52 lead into the break. Gobert had 13 of his 15 first-half points in the second.

That advantage didn't last too long for the Jazz, though. The Pistons crept back to within two points after Lyles drained a 3-pointer to make it 91-89 Utah with 9:36 left in the game.

Josh Jackson made it a one-point game by sinking a floater with 6:33 to go.