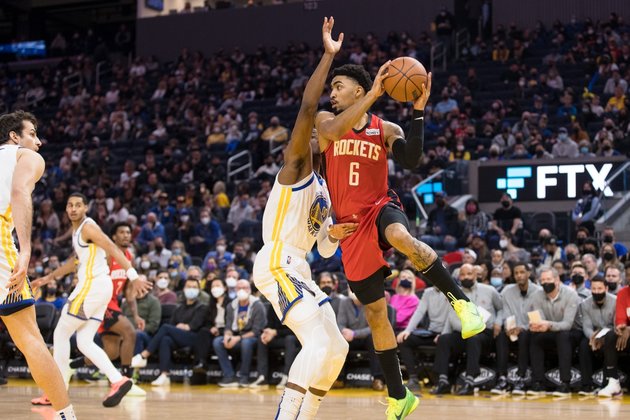 Down nine with 4:49 to play, the Warriors rallied into a 103-all tie on a pair of Otto Porter Jr. free throws with 1:22 remaining, then got one final possession when Houston's Garrison Mathews missed a 3-pointer with 8.5 seconds left.

After calling a timeout with 5.1 seconds to go -- the exact amount of time they had one night earlier when they failed to score and eventually lost in overtime -- the Warriors got the ball to Curry, who drove into the lane, created shooting from by stepping away from his defender and drilled his game-winner with zeroes on the clock.

Curry finished with a game-high 22 points for the Warriors, who had lost six of their previous nine games, including 121-117 at home to the Indiana Pacers in overtime on Thursday.

Christian Wood had 19 points to pace the Rockets, who settled for completing a 3-2 road trip.

After trailing by as many as 15 in the first half, the Warriors were within 95-92 when Mathews began an odd sequence that appeared to put the Rockets in control.

Mathews not only hit a 3-pointer while being fouled by Andrew Wiggins, but the Rockets were awarded possession of the ball after Mathews' free throw because Wiggins had been deemed to run up underneath the shooter, a flagrant-1 foul.

When Kenyon Martin Jr. added a dunk five seconds later, the Rockets had six-point play and a 101-92 lead with just 4:49 left.

But the Warriors weren't done. Jordan Poole had a 3-pointer and a driving hoop in an 11-2 burst that forged the last tie, setting the stage for Curry's heroics.

Poole backed Curry with 20 points, while Wiggins had 17 and Porter 13 for Golden State, which won despite shooting just 10-for-30 on 3-pointers. Curry had four treys in 13 attempts, and added a game-high 12 assists.

Kevin Porter Jr. added 17 points for the Rockets, who were coming off a win at Utah on Wednesday that was their second straight.

Martin totaled 14 points, Mathews 12 and Jae'Sean Tate and Eric Gordon 10 apiece for Houston, which was outshot 48.1 percent to 42.7 percent.

Wood completed a double-double with a game-high 15 rebounds.