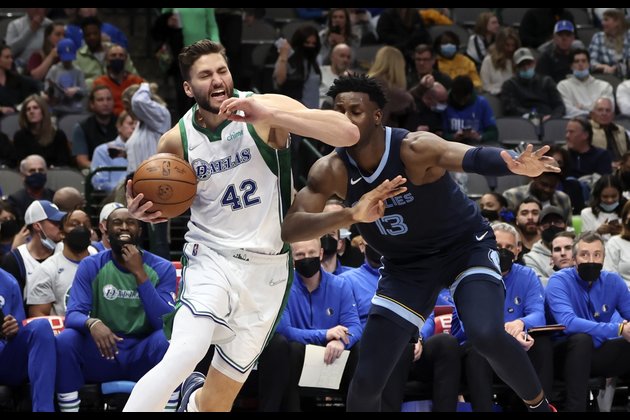 The Dallas Mavericks make a visit to their home-away-from-home Tuesday night when they look to remain unbeaten in San Francisco's Chase Center in a matchup with the host Golden State Warriors.

In the opener of a two-day, two-game Western swing that will culminate Wednesday in Portland, the Mavericks will seek to continue the remarkable success they experienced in trips to San Francisco the last two seasons.

The Mavericks were the ninth visiting team to play at Chase Center after its opening in October 2019. Dallas scorched the hosts 141-121 that December night, equaling an opponents' scoring record in the building (set on Opening Night by the Los Angeles Clippers) that still stands today.

The Mavericks scored 17 fewer points in their return in January 2020, but increased their margin of victory in a 124-97 shellacking.

Dallas has made just one other visit since, that coming last April, when the Mavericks ran up a 133-103 romp that featured 39 points from Luka Doncic.

The clubs have not met previously in San Francisco this season, allowing the Indiana Pacers, with a third win in three years last week, to match the Mavericks' 3-0 record at Chase Center.

Doncic has averaged 30.0 points in those games, the third-highest average among Chase Center visitors in the past 2 1/2 seasons behind Devin Booker (33.0) and Damian Lillard (30.3).

Doncic had 26 points, his ninth straight of 20 or more, when the clubs met in a defensive struggle earlier this month in Dallas. The Mavericks limited Stephen Curry to 14 points on 5-for-24 shooting in the Warriors' 99-82 loss.

The impressive defensive showing came during a 14-game stretch in which the Mavericks have held 10 opponents under 100 points. They did so in their most recent outing, a 104-91 home win over the Memphis Grizzlies on Sunday.

"Everybody's involved. Everybody's helping each other," Doncic observed of the defensive brilliance of late. "That's what we've got to do."

The Mavericks will look to continue their defensive run against a Warriors club that has struggled offensively in recent weeks. The Warriors have failed to reach 100 points in seven of their last 14 outings, a stretch during which they've gone just 7-7 despite having won their last two.

Curry has been the poster boy for the Warriors' offensive slump. He had just 13 points on 5-for-20 shooting in Sunday's 94-92 home win over the Utah Jazz.

The league's reigning scoring champ insisted after the Utah game that he's not concerned about the slump lingering.

"The work will show," he said of looking forward to a shooting session Monday. "Just sticking with it, keep winning games in the process and don't change anything about my approach."

The Warriors hope to have Klay Thompson back after he was held out of Sunday's game with soreness in his surgically repaired left knee.

The team continues to be without Draymond Green, who has missed the last eight games after experiencing calf pain that's been traced to a disk issue in his back.