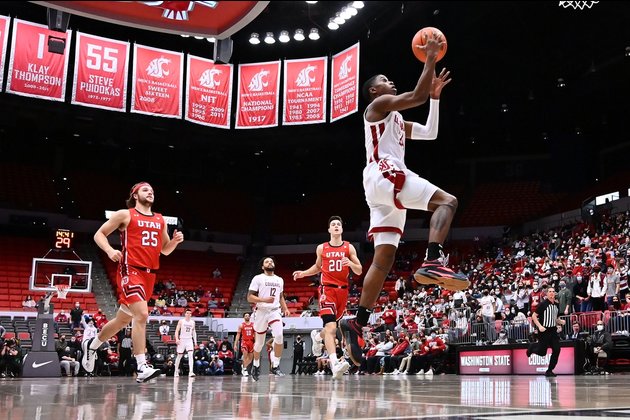 Tyrell Roberts scored all 15 of his points in the second half as Washington State cruised to a 71-54 victory against Utah on Wednesday night in Pullman, Wash.

Andrej Jakimovski also scored 15 and grabbed eight rebounds for the Cougars (11-7, 4-3 Pac-12), who were playing their first game since Jan. 15 after having a trip to Oregon and Oregon State canceled last week because of coronavirus concerns.

Noah Williams and TJ Bamba each scored 10 for the Cougars, with Williams providing all of his offense in the first half as Washington State took a 33-25 lead.

Lazar Stefanovic led the Utes (8-13, 1-10) with 11 points, all coming before halftime. He was the only player to reach double figures for Utah, which has lost its past nine games.

The Utes' leading scorer, 7-footer Branden Carlson, who missed the previous five games while recovering from an appendectomy, opened the second half with a 3-pointer to cut the deficit to 33-28.

Roberts followed with a 3-pointer of his own after going 0-for-6 from the floor in the first half.

Leading 41-31 with 15:37 remaining, the Cougars went on a 14-0 run to put the game out of reach. Roberts scored eight points during the streak, hitting a pair of 3-pointers.

Carlson finished with eight points on 3-for-4 shooting in 19 minutes of action.

The Utes had nearly as many turnovers (13) as field-goal attempts (17) entering intermission, with Washington State having an 11-1 edge in points off turnovers.

The Utes tied it at 18-all before Bamba made a 3-pointer. A trey by Michael Flowers and a second-chance layup by Williams off a fastbreak extended the advantage to 33-22.

Utah's Rollie Worster was fouled while attempting a 3-pointer with three seconds left in the half and converted all three from the free-throw line to pull the visitors within eight.