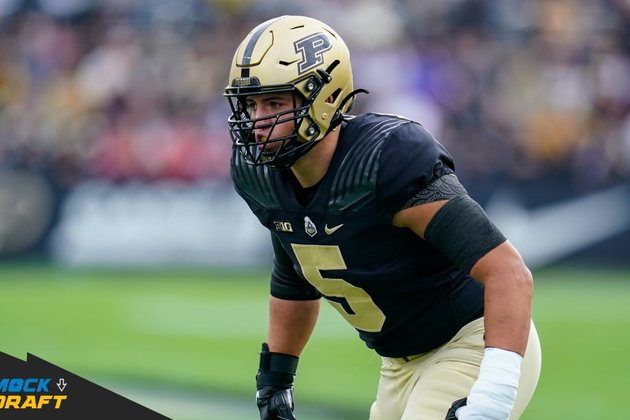 Mock draft season is back! Take a look at whom draft analysts have the Bolts selecting at No. 17 overall. The opinions, analysis and/or speculation expressed below represent those of individual authors and do not represent the opinions or policies of the Chargers' organization, front office staff, coaches and executives.

"Karlaftis is an NFL-ready defensive end. He's long, powerful with great burst and a nice arsenal of pass-rush moves."

"The Chargers clearly nailed last year's first-round pick, Rashawn Slater, who made the Pro Bowl protecting Justin Herbert's blind side as a rookie. But right tackle remains a problem area. Penning has the size, length and athleticism to stymie pro pass rushers."

"Karlaftis adds another dimension to the defensive line. Injuries and the pandemic saw him bounce back in '21 after playing limited snaps in '20 (and he was nearly impossible to stop in '19 when he recorded 17 TFLs and had 7.5 sacks). In L.A., he'll line up opposite Joey Bosa a year after the team struggled to replace Melvin Ingram."

"The Chargers like to invite opposing teams to run the ball. Under Brandon Staley, they're comfortable with two-high looks and lighter boxes, which has worked to their advantage at times, but it has also made them vulnerable. That's largely because of a lack of a dominant run-stopping presence in the middle. Davis gives them that flexibility to play light in the box without as much worry due to his massive 6-foot-6, 360-pound frame and crazy anchor ability in the middle."

"I'm higher on Raimann than most evaluators, but I believe in his play strength (his hands and core strength jump off the screen) and instincts. He starts Day 1 at right tackle and would team with 2021 first-rounder Rashawn Slater to give the Chargers excellent bookends to protect Justin Herbert."

"Los Angeles' run defense needs to improve. The conventional way of making that happen is with the selection of a big run-stuffing defensive lineman, but Jordan Davis is off the board and the Chargers can probably wait to select one in future rounds. In the meantime, they select a linebacker who is willing to do the dirty work and blow up lead blocks."

"The Chargers again struggled against the run in 2021, an issue that has plagued them for years. Just go back to their 2018 divisional-round playoff game against the Patriots, when they were dominated up front. They allowed 4.8 yards per carry this season, which ranked 28th in the NFL. With Linval Joseph hitting free agency, there is a massive hole in the middle of their defensive line.

"Who better to fill that than the 6-foot-6, 340-pound Davis? He'd make the entire defense better because he eats up blocks and allows linebackers to roam free. He also can play on three downs; he's not just a plugger. He showed on his sack in the national title game that he has some pass-rush ability, which is scary for a man of his size. Davis won't be a fit for every team, but the teams that run a 3-4 defense will eye him in this range."

"Do the Chargers make the playoffs if they receive better play at right tackle over the final month of the season? Penning has a massive frame (6-7, 329, 35-inch arms) with the athletic footwork and competitive chops to develop into a Pro Bowl-level player."

"'Draft Twitter' will fall in love with Devin Lloyd. The 6-foot-3, 235-pound Utah off-ball linebacker was a heat-seeking missile and an every-down impact player for the Utes. He earned a 91.1 PFF grade as one of college football's top defenders in 2021."

"The behemoth that is Jordan Davis would have been an ideal prospect to quickly improve the Chargers' 30th-ranked run defense. But with him already off the board, the Chargers opt for a twitchy pass-rusher to line up opposite perennial Pro Bowler Joey Bosa. Ojabo is still raw, but he made monumental strides playing with potential No. 1 overall pick Aidan Hutchinson at Michigan. He'll make some flashy plays as a rookie while developing the necessary traits to win consistently against NFL tackles."

"The middle of the Chargers' defense got taken off the line of scrimmage with a slight breeze in 2021. That can't happen again. The 360-pound Davis has no problem anchoring in the run game."