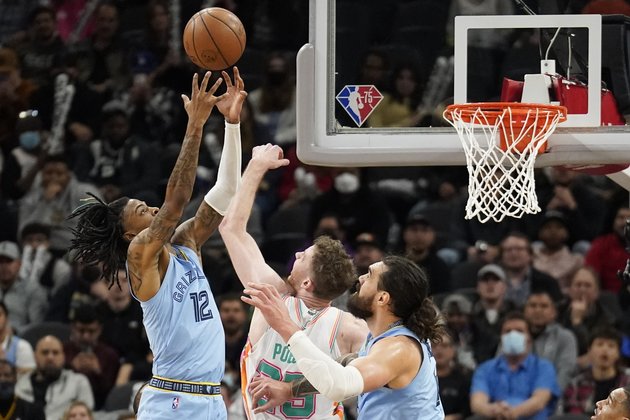 Memphis is one of the hottest teams in the NBA right now and Ja Morant is the engine powering the Grizzlies' success.

Morant's MVP level play has helped Memphis win 14 of 17 games ahead of Friday's home matchup with the Utah Jazz. He is averaging 36.8 points and 8.5 assists over his last four games.

In his most recent game on Wednesday, Morant equaled his season high with 41 points and dished out eight assists to lead the Grizzlies to a 118-110 road victory over the San Antonio Spurs.

His ability to take over a game was evident in the fourth quarter when Morant totaled 13 points -- including a pair of huge dunks that gave Memphis a double-digit lead.

He helped the Grizzlies outscore the Spurs 62-50 in the paint.

"I don't care who's down there, I'm not afraid to finish against you," Morant said. "My job is to score the basketball when I'm in the paint. If you're in the way, I'm still trying to finish the play."

Morant has shot 50 percent or better from the field six times in January. His efficiency and production has lit a fire under the Memphis offense, which has been held under 100 points just twice since the start of the month. It has kept the Grizzlies going strong, even while Dillon Brooks has been sidelined with an ankle injury.

Stopping Morant will be a major concern for Utah with both Rudy Gobert and Donovan Mitchell sidelined. Mitchell has missed five games with a concussion and Gobert has sat out two straight with a lower calf injury.

The All-Star duo were sidelined during a 105-97 loss to the Phoenix Suns on Wednesday night. The Jazz trailed by 21 points after one quarter when Devin Booker poured out 21 of his game-high 43 points in the first 12 minutes.

Utah rallied and eventually cut the deficit to two points at 96-94 on a dunk from Hassan Whiteside with 2:14 remaining. The rally fell short when the Jazz scored just one basket over the final two minutes.

"We gave a 20-point lead up in the first quarter because we weren't focused on the things we need to focus on to win," Utah coach Quin Snyder said.

Mitchell is expected to return from concussion protocol this weekend. He could play against Memphis on Friday or Minnesota on Saturday. Getting their leading scorer back in action will be a major boost to a floundering Jazz team that is steadily losing ground to other Western Conference contenders.

Utah has lost nine of its last 11 games. The Jazz have sputtered at times on offense with a plethora of turnovers and have struggled to find consistency on defense for long stretches.

Still, Utah players remain optimistic that they are only a few plays away from overcoming the team's current slump.

"We're just trying to find our way regardless of the situation," point guard Mike Conley said. "Regardless of the losses, I think we're heading in the right direction as far as staying connected."